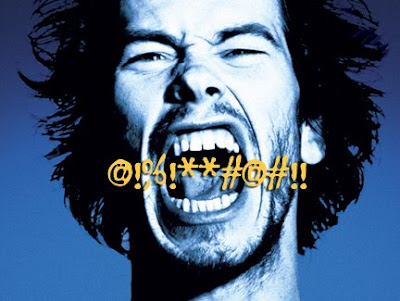 Ginger is entering a phase of her development where she's repeating almost everything that Amie and I say. It's really amazing to watch...one of Mother Nature’s little miracles...and a wholly terrifying experience for someone like me. As some of you may know I am prone to the occasional "f-bomb" here and there (a byproduct of a harsh upbringing on the mean streets of lower Manhattan).

To make matters worse, I surround myself at work with people who like to curse almost as much as I do. It also doesn't help that I am engaged in a trade that lends itself to lots and lots of cursing. We do interactive design work which means I need to a) make things pretty and b) mess around with technology. If you've ever tried to a) have a "discussion" about what color you should paint your kitchen with a family member or b) tried to get your neighbor's wireless network set up....then you're beginning to live in my world....and it's world where an effectively placed four letter word can provide just the catharsis you need to find a reason to go on.

So....it's not quite a David Mamet play - but if Alec Baldwin showed up one day holding a pair of brass balls and talking about "the leads" and how we need to "always be closing" - he'd fit in pretty seamlessly.

Anyway - I was putting together a "gate" of the kind that is meant to keep small children out of the kitchen. The gate was purchased at IKEA where the complexity of the assembly process runs parallel to the cost of the item. If you really want to bang your head against the wall interpreting the inner meaning of a Swedish instruction manual's post-modern cave man wall illustrations....buy something from IKEA that you know is less expensive than it should be....then you will truly know what it means to live inside the heart of darkness.

Right...so I was assembling the gate in a state of dark, dark misery and reached my own personal apex of frustration. Some might call this a "boiling point" or perhaps more appropriate, a "breaking point."

Allow me to set the scene...

The babies were both crying...

Amie was dancing closely on the edge of a nervous breakdown trying to entertain the kids on zero sleep and a negative index of patience for unhappy toddlers and unhandy husbands...

And I had just reached that magical point in a furniture assembly when you realize that 12 or 13 steps prior to the one you are on, you inserted some now immovable piece backwards...and that retracing one's steps will require an extra 20 minutes that you can't seem to locate in your holy-shit-i-can't-believe-i-just-did-that tank of gas.

Well....at this point, friends, I looked at the ground, closed my eyes and said "FUCK!!!!"

As if on cue from a Hollywood director....with eyes still closed....I hear the tiniest of tiny girlish voices not two feet behind me (on the other side of my half-finished-soon-to-be-quarter-finished Swedish gate) say, "Fuck." It was not said in frustration or with any particular vigor...just a 1 year-old girl riding the learning train and getting off at the "Irresponsible Parent" stop in Foulmouth, NY.

Now realizing that I've taught my daughter how to pronounce a word her grandmothers will not be pleased to hear see emerging from the face of an angel (and worse yet I had given her the proper context for its use), I had yet another internal combustion of anxiety, fear and loathing....to which my body responded by saying..."FUCK!" (I shit you not)

Having considered my work here done.....I poured myself a nice glass of Jack Daniels (it was 7:45AM on a Sunday), put my feet up on the table and waited for the police to take me away.

Unknown said…
Hysterical! I forwarded it to my Dad...he will get such a kick out of it...he shares the same tendency to shout out f-bombs while struggling to put things together. Remind me to same day tell you the story about my 3-wheeled doll carriage. Em
April 8, 2009 at 5:40 PM

lukemelia said…
ROTFL. Reminds me of my younger sister Daniele, then 3 years old, pointing to the magnetic letter "A" on the fridge and asking, "Mommy, is that a 'Fucking A'?"
April 9, 2009 at 4:14 PM