Citibikes: The Good, The Bad and The Ugly 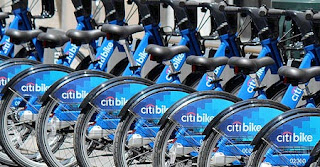 I have been an avid user of the CitiBike program in New York since it launched and I will now attempt to summarize the good, the bad and the ugly aspects of it.

- They are tough. The bikes reflect the city they serve pretty faithfully in that I feel confident I could ride one across the East River (by way of crossing through the water) and come out the other side with a working bike.

- The program is digitally reinforced.  There is an app that lets you see where all the stations are and how many docks and bikes are at each one. I make apps for a living so I have a short list of recommended bug fixes and feature enhancements but overall it works very well as a version 1.0 release.

- There are a lot of them. I got a flat tire in Times Square once…pulled out the app, found a station a block away, swapped it out and was back on my way. There is strength and conveinence in sheer numbers.

- The city is behind it. The city seems dedicated to iterating the concept like it's an actual product (evolving and improving it based on historical data and user feedback).

- It's kind of magical. It's so easy and convenient that you sometimes feel like you are stealing or doing something wrong. There's an odd euphoria associated with it that feels like beating the system.

- They are often hard to find. Finding a CitiBike after 5PM on a weekday in midtown is like finding a cab five minutes after midnight on a chilly New Year's Eve in Times Square…when it happens you become overtaken by a complex medley of emotions that include joy, surprise and suspicion (that it could not really be true…that some kind of game is being played here).

- People (mostly older white women and "real bicycle people") will hate you.  95% of the people who have yelled at me while atop a CitiBike have been white women who are angry that I am not stopping at a red light. Some of these women were jaywalking against a red light at the time of the incident.

Now…here's my theory. If you are on a Citibike (or any bike) and you come anywhere near a pedestrian who has a walk signal…you are an asshole and you deserve to be yelled at (at the very least). But…let's not all pretend that we pedestrians in New York City don't use traffic lights and traffic laws in general as "general outlines" written in barely visible pencil on the backs of cocktail napkins. The city operates on every level with a loose association of rules that basically state "Don't fucking run me over and we're cool." So let's leave it at that and all just go about our business.

The other group of people who sneer at you are "real bicycle people" and these are the people who have been riding their bike to work long before their commute got clogged up with a bunch of yahoos who don't know and/or respect the unwritten bushido code of bicycle conduct.

NOTE: Bike messengers are not included in this group because they hate everyone and seem to operate on a Mad Max level of chaos, danger and anti-social behavior that sits ahead of any other subspecies within the city limits.

So yeah - some sneering and on occasion some yelling is to be expected.

- The bell. I'm sorry but enough with the bell. If you are about to crash into someone a reasonable way to handle that is to yell "Holy fucking shit man…get out of the way…I'm about to crash into you!" (if it's your fault)  or "Watch Out You Asshole!" (if it's their fault). The bell just bothers me (for reasons I can't fully articulate).

- They are…ugly. They look like a bike that Walmart would sell to 13 year-old girls in a post-communist eastern bloc country. This does not bother me. I imagine it bothers many…to varying degrees.