My deepest, most intense and horrible fear is that one of my children could become lost. Not lost in a metaphysical sense (lost in life…not on the path that is right for them) but lost in the physical sense…that one of them could become woefully unattended and dangerously exposed to the elements of the harsh, unforgiving world because she has become disconnected from adult supervision and is scared, alone and in trouble. I can think of a few things worse…but this is very close to the top of that morbid "dad-list-of-horrible-shit-that-could-happen-to-one-of-my-daughters."

It was with this fear in mind that I set out this week on a CitiBike at 2:45PM on a Wednesday to perform a covert operation at Ginger's school. By the end of this story you will judge me either as:

I welcome your thoughts and feelings.

First…some background. My daughter Ginger attends a public school that is across town from our apartment in Murray Hill. Last year (when she was in kindergarten) we drove her to school every day. To make a long story short…we decided that this year she will take the bus to school…mostly because my wife is 18 months pregnant with our son and when Boo Boo Jane arrives…he will leave little logistical room for two children to arrive at school at simultanous start times across town from one another (all part of the switch from a "man" to a "zone" defense.)

So with the start of the 2013-2014 school year - we marched confidently towards putting Ginger on the bus with all positive intent and hopeful optimism. From the beginning, there were signs of trouble. Namely…the bus did not arrive on time nor at the location that was listed on the bus company's website. If you've had an opportunity to "tango" with the NYC Department of Education or any of it's vast and sundry extensions (like the bus company that delivers the children to school and yet is 100% not affiliated with the school at all…for Christ's sake)…you know what I'm talking about.

So needless to say…when it came time for Ginger to ride the bus home…where a number of variables are introduced not present on the morning pickup (will she make it from school lo the correct bus? will she get off at the wrong stop?)…I was suddenly and uniformly unable to take chances. So at 2:45PM this past Wednesday I left my office on 31st and Broadway, grabbed a CitiBike and rode it to Ginger's school.

And the events that transpired went a little something like this:


Finally, we arrived at Ginger's drop off location and Amie was there to greet her. As the last pools of sweat cascaded into my eyes from my forehead I saw Ginger recognize me by the side of the street and she came over to give me a hug…which I accepted willingly. I didn't say it but a line from the movie Singles popped into my head…"I was just nowhere near your neighborhood." 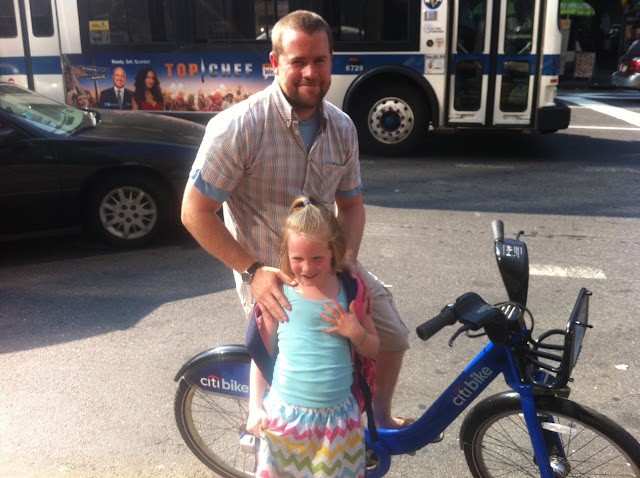