So far fatherhood 2.0 is going well...Lucy appears to be "the chosen baby"...all she wants to do is eat, sleep and poop....which God knows is what we're all really after in life but somehow she's achieved it without want for pretty much anything else.

Our stay at the hospital was relatively brief and uneventful. The one interesting thing that happened was the US Airways plane that went down in the Hudson River. Roosevelt hospital is on 58th and 10th Ave and the plane went down about 10 blocks away. Ginger and I were staring out the window looking at the boats go by from the hallway window and left to go back to the room literally about 5 or 10 minutes before the plane went into the water. Apparently Lucy was not the only one looking to make a hurried, dramatic landing onthe Upper West Side that day.

Alas - below is my photo-retelling of the past few days.... 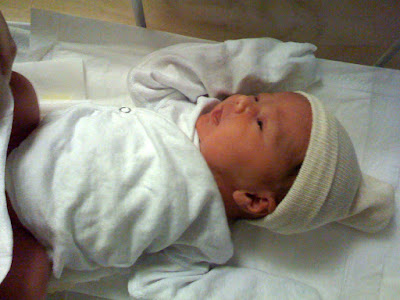 This is Lucy at about day 2...wearing her standard-issue, hospital-mandated baby straight-jacket. She asked - in her own special way - if I or the hospital staff thought she was crazy and I told her no....that it was just how they rolled here....and that we would have a decidedly less institutional dress code in place back at the apartment. This seemed to satisfy her. 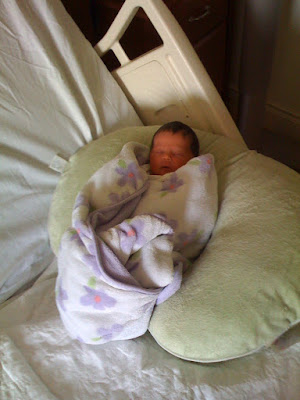 I'll take "Cute Little Baby Wrapped Up All Kinds of Flowery Blankets and Pillows" for $1,000 Alex.... 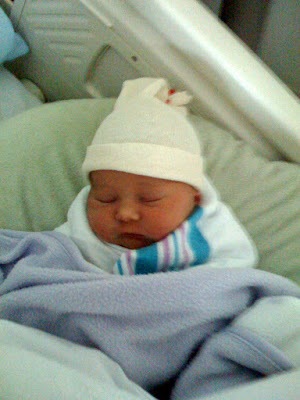 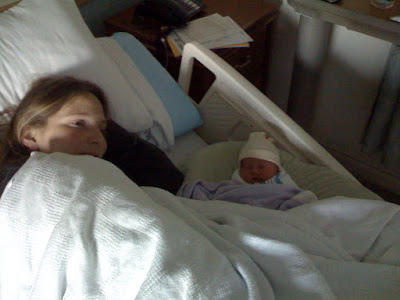 There's something about proximity to the "mothership" (not that my wife resembles a "ship" in any way)....that is soothing when you are in your first few days of life. This is about as cozy and safe as you can get in my book...in fact...I think I need a nap just looking at it. 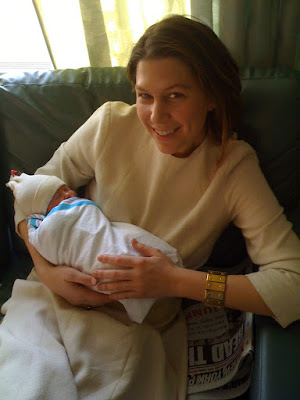 Our friend Katie came by to hang with Lucy for a bit. As is common among those who hold newborn children - especially unspeakably cute Sanborn girls - Katie become consumed with love and admiration for the child and tried to kidnap our child without us noticing. Luckily, Amie caught Katie's inconspicuous movement in the direction of the door and pounced. She delivered a trademark "Amie Duffy" college rugby clothesline maneuver which sent Katie to the floor and Lucy into the air and back in the arms of her mother. It was a valiant effort by Katie though....she left everything out on the field...no shame girl. 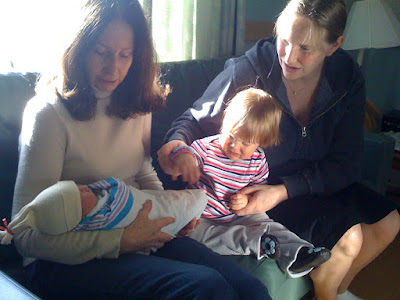 Here we have the first formal introdction of Ginger and Lucy. The expression on Ginger's face seems to say it all: "What is this now?!?" 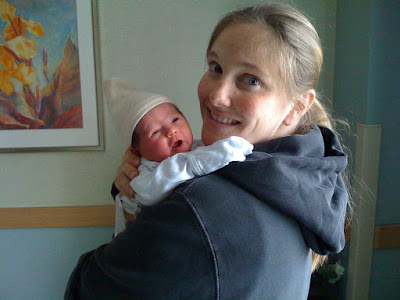 Lucy seems to have inherited her sister's freakish infant neck strength....just like Ginger she's already picking up her head in what appears to be a desperate attempt to escape. I can't say I blame her...judging from the sound decision making her parents exercised by waiting to the very last minute before going to the hospital for delivery....there is much evidence to support departure to a safer port of call. 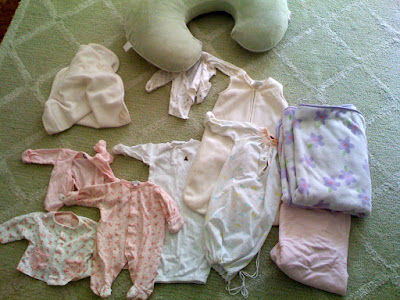 Let me paint a picture for you to describe what's going on above.....let's say you are a dad.....and let's say (hypothetically) you nearly passed out in the delivery room during the birth of your second daughter and you really, really don't want to mess anything up on the baby/mommy front for at least the next few days. Then let's say (hypothetically) while jotting down the items that your wife asked you to pick up from home for the new baby you decided to fire off a few work emails and got distracted and totally forgot to bring said list home with you. Well...if you were in a position like this....you might have gone so far as to lay out all of the items you think you need to bring back to the hospital....photograph them....email them to your wife to make sure you did not forget anything....call her to remind her how pretty she is....and then proceed with haste back to the hospital with all items in tow....hypothetically. 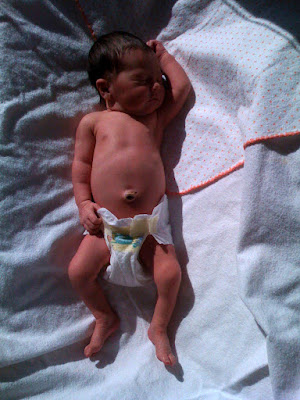 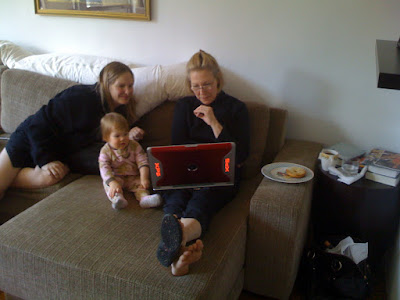 Amie, Ginger and Grammy taking a little sesamestreet.org break. Is it wrong that I find Sesame Street genuinely entertaining and funny these days? I find myself watching it even after Ginger has drifted her 4-second attention span onto something else. Of course, I did also find myself playing her xylophone for 20 minutes the other day before I snapped out of it and realized I had been playing a xylophone for 20 minutes. Good times....great oldies.... 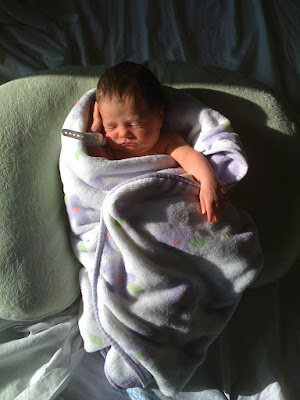 Since Lucy had a bit of jaundice, the doctor prescribed lots of sunshine to aid in the return of normal skin color. Lucy took that as an opportunity to play some Will Smith albums (Summertime) and hang back with her iPod for some sun-soaked R&R.