I apologize for the chronological aberration - especially given the blog format I am working in - but below is a recap of our Christmas activities for 2008...which I was finishing up right about the time Starship Lucy invaded planet Sanborn.

I should start by saying the entire holiday season was peppered with illness...Amie and Ginger were both horribly sick with a first class cold....it was not quite the flu....but it sure was messy. Case in point is the picture below.....I mean...Ginger looks like she just got back from an expedition to the far reaches of the African Congo to do research on a new string of Ebola virus... 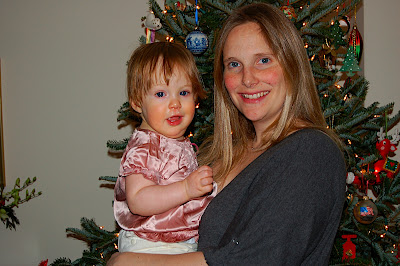 Our adventures began Christmas morning...in which Ginger gave thanks to Santa for bringing her a cough with cold, a global recession and a severe lack of hand-eye coordination (actually she thanked her mother for that)...

After we completed our Sanborn family Christmas at home - we headed off to the Soviet Republic of Long Island to celebrate with Amie's family...aka The Siegels. Christmas at The Siegels is like nickel beer night at Cleveland Municipal Stadium....there are a lot of people, and a lot sharp objects flying through the air....but if you keep your head on a swivel and your wits about you....it can be quite a thrill. I was able to capture a quick glipse of the "scrum" for posterity:

After Christmas we headed to the People's Republic of Connecticut to make a few large cash donations to the Mashantucket Pequot Tribal Nation via the new MGM Grand Casino at Foxwoods. Amie's younger brother, Drew, had just turned 21 on Christmas Eve and since Drew is the youngest of 6 children, we figured it was only fair that he get something in return for watching the rest of us drink all these years.

Despite the presence of alcohol and alpha males...I and Amie's brothers managed to NOT get into any fights with local yahoos this time around....which was a refreshing turn of events for all parties involved. 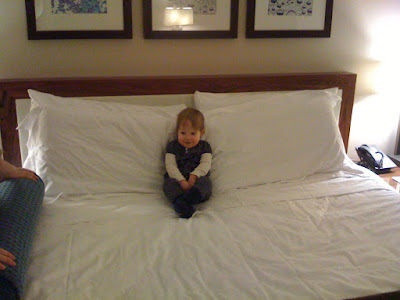 Ginger was very much digging the big, beautiful bed we were assigned...we lost her in there a couple of times but it was worth it. 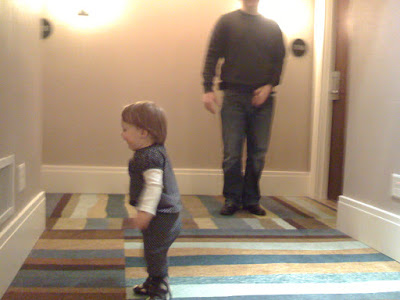 Ginger walked down the hall and realized that if she went right up to the air vent it would blow her hair back....a sensation she apparently had not experienced yet in life....so I am glad the fine people of the Pequot Tribal Nation could accommodate in that regard. 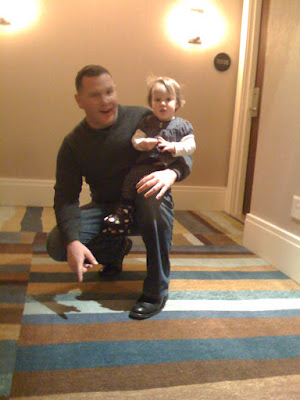 Never satisfied with letting another family member own the spotlight....Ryan (Amie's older brother) knocked Ginger over to experience the aforementioned hair blowing experience....it was only later that I was able to calm Ryan down (he spent a few minutes taking a "time out") and teach him a thing or two about sharing...finally he agreed to enjoy the air vent with Ginger together. 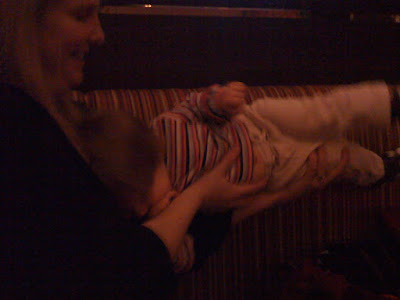 We went out to dinner at the fancy restaurant in the casino and we could not help but notice that the pattern on the bench seating cushion was almost exactly the same as the pattern featured on Ginger's shirt. When we held her up horizontally against it - she was quite nearly invisible.

Through the powers of a very cool app I learned about from the resident photography punk in my office I captured the above panoramic shot of the very heated boys v. girls pictionary game that went down one night (boys won....by a lot).