This week we took Ginger to fulfill yet another in a string of American rights of passage....a visit to Santa at Macy's. Despite going on a weekday during the afternoon, there were still 102,456 people there who had the same "off-peek" strategy we d.

1:45PM - Macy's Elevator
Arrive at Macy's and squeeze (with 12 other people) into an an elevator (built for 8). I took this shot of Ginger while said squeeze was removing the last few molecules of oxygen from my lungs... 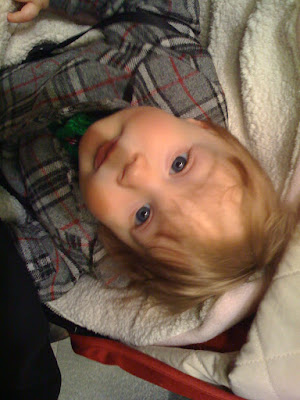 1:55PM - Macy's 8th Floor (aka - the 7th circle of Dante's Hell)
Seeing this kind of human carnage really makes you want to go home and write up a very thorough "escape plan".....there's nothing like the sight of 102,456 people waiting on a line to see a homeless person dressed as Santa Claus to remind you that society is, in fact, on the brink of total anarchy. 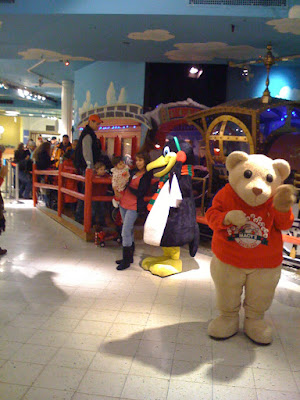 For reasons that were unclear to me and to most of the other parents in attendance, a giant rat and a giant penguin were positioned outside the Sit-On-Santa's-Lap-Train-Wreckage area. At first I thought I wandered into a non-union construction site (where NYC union reps are prone to erecting giant inflatable rat effigies on the sidewalk). At any rate....the over-sized rodent was serving as a suitable distraction for the 102,456 people who would otherwise be tearing out each other's esophagi....so his presence was generally accepted by the mob.

However, at one point the rat and his creepy friend dressed as a park ranger conferred about how they might distract Ginger, steal her food and clothes and leave her naked and hungry in the middle of the Sit-On-Santa's-Lap-Train-Wreckage area as a means to further entertain and distract their audience (who had at this point grown tired of the novelty of seeing giants rats and penguins). 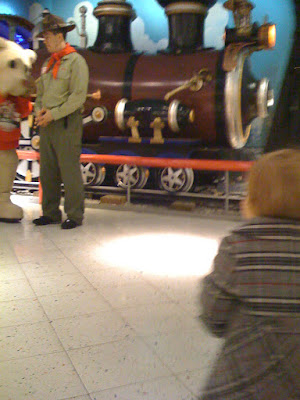 Ginger could not help overhearing their nefarious plan and decicided a head-on confrontation was in order.... 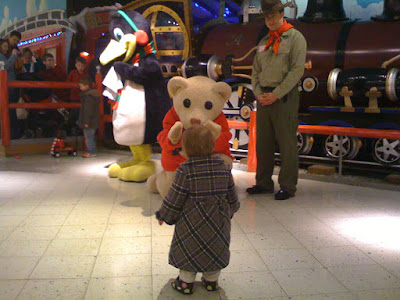 Displaying a talent for delegation and crisis management that will no doubt suit her well later in life when the reigns of Sanborn Media Factory are handed over...Ginger decided to consult with Mommy on an "appropriate, measured response...." 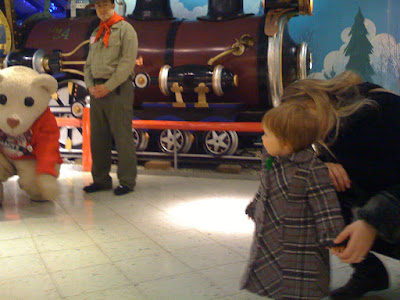 Ginger invited Mommy to lean in and then issued the following instructions... "Mommy.... right..... so I'm gonna need you to go ahead and walk on over to that rat there and bring me his head." Mommy said, "Excuse me Ginger? Did you really just ask me to cut off the head of that mouse over there?" Ginger responded with a bit of curious indignation, "Well of course mommy.... what else are we to do with strange and unnatural beings from the underworld which threaten our way of life? Daddy said we must...." And with that Mommy shot a hard and penetrating stare at Daddy....who was already 5 steps deep into a hasty egress.