Sleep Training and No Hitters 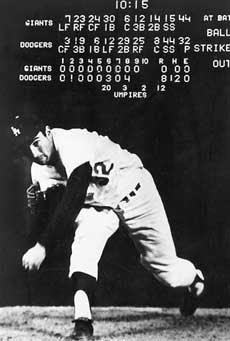 Think sleeping babies and Sandy Kofax have nothing to do with each other? Think again.

Sleep training (the process by which you train your small children to learn how to go to sleep for a healthy 8 hours or more) is a lot like a no hitter (a baseball game in which the pitcher does not allow a hit from the opposing team's batters for a full 9 innings.)

Here's why...when a pitcher is in the midst of throwing the no hitter (also known as a "no-no") an unwritten rule declares that no one on his team can mention it to him or to anyone else. Basically you just can't talk about it...out of pure superstitious respect for laws laid down by the baseball gods.

For the past three months or so, Amie and I have been trying everything to get Ginger to return to the very healthy sleep patterns that defined her early sleeping career. Somewhere along the course of her game she lost her way...and now wakes up crying several times a night.

There are nights...like tonight...when we put her down and she does not immediately cry...but when this happens...neither of us acknowledge it. Despite the fact that it's all either of us can think about...we don't talk about it (for fear of disrupting the delicate balance of superstitious molecules surrounding Ginger's tenuous sleep bubble).

Baseball and sleep training....two games played with a singular goal in mind (winning) and which count on teamwork...and apparently...the gods.