When I lived in Chicago we used to go to a place called "La Bamba" for burritos. It was kind of strange actually....in Chicago...after a proper night of drinking beer you head to the burrito joints at 4AM (where a NY-minded soul might be more inclined to seek out a slice).

At first it was jarring (Amie and I actually tried to "force it" a few times and would go to a pizza place only to find deep dish pizza that took 45 minutes to make....which equated to passing out before it arrived). We eventually gave up and jumped on the burrito bandwagon (and then of course reverted back to the pizza train upon arrival back here).

Anyway - Ginger came to the office today and was given, by her mother, an enourmous cookie. It was enourmous by "big person" standards and thus made her look like a lilliputian holding Gulliver's dessert.

It made me think of La Bamba because their tagline was "La Bamba: Burritos As Big As Your Head." Effective marketing strategy....for them and clearly for Ginger as well: 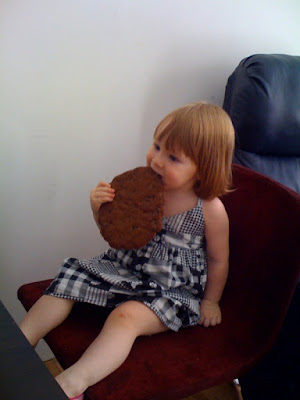