And now a cautionary tale of poor willpower...

It was an otherwise uneventful afternoon at Grandma and Grandpa Sanborn's house when Ginger, sensing a window of opportunity, decided to exploit the confidential nature of the Grandpa-Granddaughter client relationship.

As Ginger well knows...there are certain foods that she is simply not allowed to eat. Chief among these foods are those which are traditionally found at the top of the international "yummy" list and at the bottom of the pediatrician's "acceptable food for babies" list.

Now - before we proceed with the rest of the story - a word about the complex dynamics behind "parenting" and "grandparenting."

Parents everywhere are conditioned to balance the often opposing natural forces of:

It's nothing new. Parents obviously want to give their kids everything. But like any responsible approach to....anything....the long term consequences must be considered in hand with the short term gain.

Also worth noting that the compromise is often a selfish one. Parents want to let their babies stay up later than their bedtime when they are having fun...but they know that doing so will mean difficulty falling asleep - which threatens a successful watching of the next episode of Mad Men coming on later that night.

Grandparents are in a unique position. They obviously understand the "rules" - since they are, by definition, former parents of small children. However, the neurotransmitter system in the brain responsible for making this connection becomes inverted when a parent becomes a grandparent...thus granting all grandparents everywhere the freedom to focus entirely on the immediate satisfaction of appeasing a baby who wants something that should probably not ve given.

Grandma and Grandpa Sanborn were charged with feeding Ginger her dinner last night and Grandma left her chocolate ice cream bar on the table for a few minutes while she answered a phone call in the kitchen. Ginger...in recognizing Grandpa's significantly less formidable defense mechanism for resisting the requests of his granddaughter...as well as the chance to concentrate her line of attack on a single target...eyed the the perfect storm that was brewing.

With a suggestive glance over to the ice cream bar, Ginger began her nuanced attack. Grandpa, sensing the threat to his outer defenses, opted for an immediate full-court-press to subdue the oncoming attack..."NO Ginger!" he said with the formidable authority of a seasoned patriarch.

Ginger let out a small whimper and a carefully engineered look of surprise...as if to say "What Grandpa? Why so angry? I'm just a little baby? I don't know any better...I just want some ice cream....is that so wrong?"

Grandpa's DEFCON 1 defense system showed signs of failing as he now first entertained the thought of giving Ginger the ice cream. "How bad can it be?" ...he thought.

Seeing that her initial broadside was penetrating the outer shell, Ginger made a bold move towards the "soft, gooey center" of Grandpa's parental responsibility nerve center. All it took was a slight frown, a puppy dog look of sheer innocence and a soft whimper.

Grandpa, a trained medical physician, constructed a rationalization on the spot to support the move he was about to make..."These pediatricians these days...." he thought to himself..."what do they really know?....One day it's this thing they can't have....the next day it's something else!...I mean, babies can't have ice cream? What's the world coming to? Is this Russia? This isn't Russia is it? It's a free country!"

Feeling compelled now to thwart the resurgent threat of communism (and global jihad...which also wound it's way into the rationalization mix), Grandpa seized the ice cream bar and handed it to Ginger for a nice big lick. He did it for his granddaughter, but more importantly...he did it for AMERICA!

Thankfully, I happened upon this egregious departure from standard operating procedure just before it took place and documented it below. 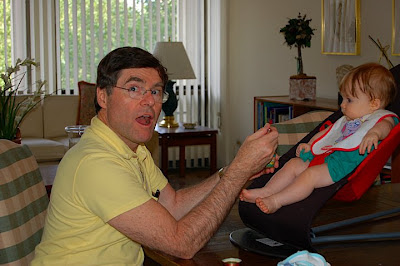 NOTE: This story may or may not be based entirely on an imaginary sequence of events that I conjured in my head when I saw this photo. We'll never truly know so we may as well assume it is entirely true.